No online shopping during work hours

The Europe voting between the Jobswype users this summer clearly showed the following: European employees predominantly do not shop online during work hours. Praiseworthy attitude, as solely by employment agreement, this subject is not strictly determined and hence not forbidden practically.

Vienna, 08/10/2017-  Are you already making your purchases electronically? And if yes, are you doing it in your working hours? If you answered the first question with “yes” and the second one with “no”, you are in line with the European trend. Employees from Ireland to Romania are not wasting their time at work with online shopping but postponing it to their leisure time. This has been showed by the europe-wide implemented poll from Jobswype in July 2017.

Employees are doing their online purchases in their leisure time

72 per cent of polled people in the UK indicated that they never shopped online at work within the last month, 18 per cent did it 1 to 3 times and 11 per cent often. So the result of the most recent poll of the internationally acting job search engine Jobswype. The result has been clearer than ever; the absolute majority of European employees, depending on the country between 71 and 89 percent, can not imagine doing their online purchases at work. Between 7 and 18 per cent still did it 1 to 3 times and risked getting caught by their employers by doing so, whereas between 3 and 14 per cent of the polled people are looking for bargains online more often.

“There are reliable numbers from 2017. A study from SME research in collaboration with the Austrian trade association and the platform for trade and eCommerce has examined the purchase behaviour of the Austrians,” explains Jobswype director Christian Erhart. “And these numbers show that the distance-trade in Austria is constantly high at the moment.” These at the first glance contradictory results can be explained by the fact that the majority of European employees is still strictly separating their private life and their working life and hence doing their purchases uniquely in their leisure time. a result to the pleasure of the employers, especially since the legal situation concerning online shopping at work is not strictly regulated.

Not prohibited by law

According to the information office of the European parliament in Austria, the regulation of labour law is to be determined by the member states by themselves. The parliaent can only determine minimum standards. Though there are at the moment no such minimum standards concerning online shopping during working hours. Employers on the other hand, have the possibility to keep their employers from online shopping at work, knows Christian Erhart: “There is no right for the private use of the Internet at work in Austria. The employer can even completely prohibit it or at least implement rules concerning the private use of the Internet at work. If there is no such regulation, according to the Austrian Chamber of Labour, a use in moderation is permitted.”

This poll has been conducted in July 2017. 1811 users took part throughout Europe. 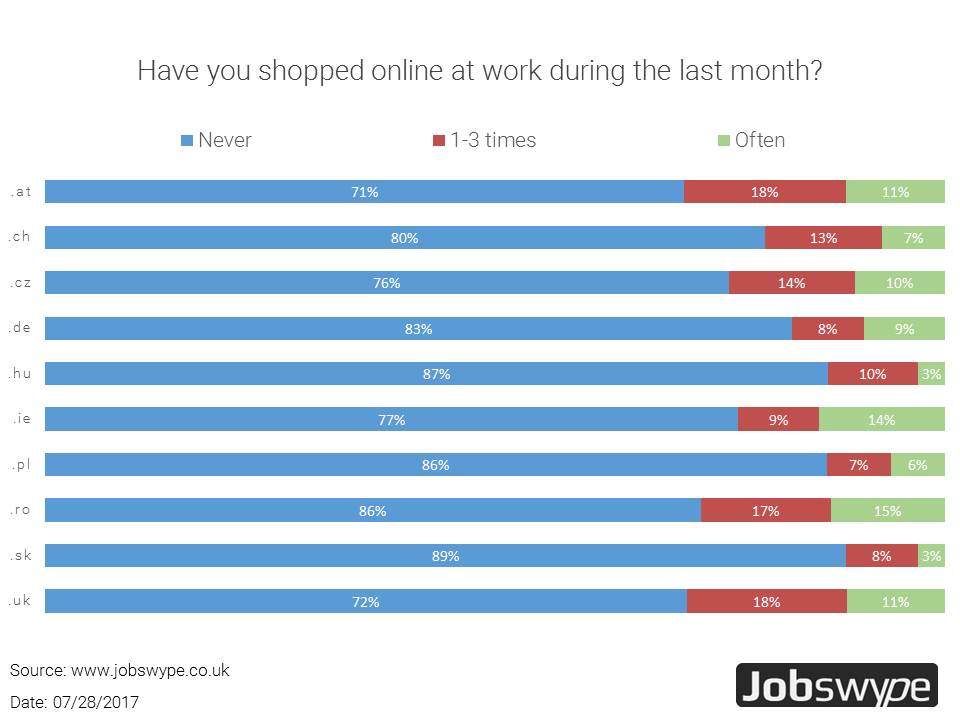 No online shopping during work hours