Majority of European employees stays home when having the flu

At a different ending is Rumania. 78 percent of Rumanian employees continue going to work with the flu.

The UK and Ireland in midst of this year’s flu season; according to official data, the flu season began around the turn of the year. But not only the real influenza but also flu-like infections such as colds in general are gaining around in this cold time of the year. For employees and companies this means an increase of sick notes. The job search engine Jobswype therefore asked its users if they would still go to work even when having the flu. Bedside and recovery or desk and working stress?

The European overwien of the Jobswype poll largely shows similarities in the conduct of employees in case of sickness, including selective major outliers in some countries.

Going to work with the flu?

A clear “No” to going to work with the flu prevails. Indeed, the majority of polled people decided to stay home in case of illness. Out of the polled Austrians for instance, 80 percent would stay home. Similar results could be seen in Switzerland (89 %), Hungary and Poland (84 %), Germany (82 %) and the Czech Republic (81 %) as well as Slovakia (72 %). The tail light is represented by Rumania, where only 22 percent of the polled employees would stay at home if they’d have the flu, meaning that 78 % percent would still go to work in case of illness. Significantly fewer people are concerned about their health also on the isles; 42 percent of Irish employees and 38 percent of English employees would go to work with the flu.

By doing so, these employees risk to infect their colleagues. Many people underestimate the severity of the symptoms, since even for doctors it oftentimes is difficult to differentiate between a real influenza and a cold, as the symptoms are very similar. For a full recovery there is only one right answer though: Taking sick leave.

Risk for themselves and others

Very “conscientious” employees will at least turn up at work during the first days of their illness. What may sound like a good solution for them, to not upset their bosses with sudden sick leaves and losing precious working time, could easily backfire though. “Even if the employees may have the best intentions, in reality they just jeopardize themselves as well as their colleagues whom they might probably infect. Untreated infections can worsen and lead to even longer illness. A sick employee can easily infect the whole team. Both scenarios are unpleasant ones for employers.”point out Christian Erhart, Jobswype director. “A person who is really sick should immediately make an appointment at his doctor and take the legitimate sick leave in order to become healthy and able to work again.”

Cold and flu difficult to differentiate

An explanation for the numbers in Europe can be found according to Christian Erhart in the similar symptoms of the two diseases: “Nobody wants to be severely sick, which is why we at first like to talk ourselves into our sickness simply being a cold. An influenza-like infect and the real influenza often start with the same symptoms. At this stage, as it has already been mentioned, even doctors have difficulties to differentiate and make an appropriate diagnosis.”

Influenza, the “real” flu, is being induced by the influenza-virus and manifests itself by a severe fatigue, head and limb pain and a high fever. So called “flu-like infections”, colds, on the other hand, can be induced by numerous other viruses and cause similar symptoms. The difference: When infected by an influenza, all of the symptoms occur more or less suddenly and the fever rises significantly. Colds on the other hand normally only lead to a light fever.

This poll has been conducted by Jobswype in January and February 2018. 2 279 people took part. 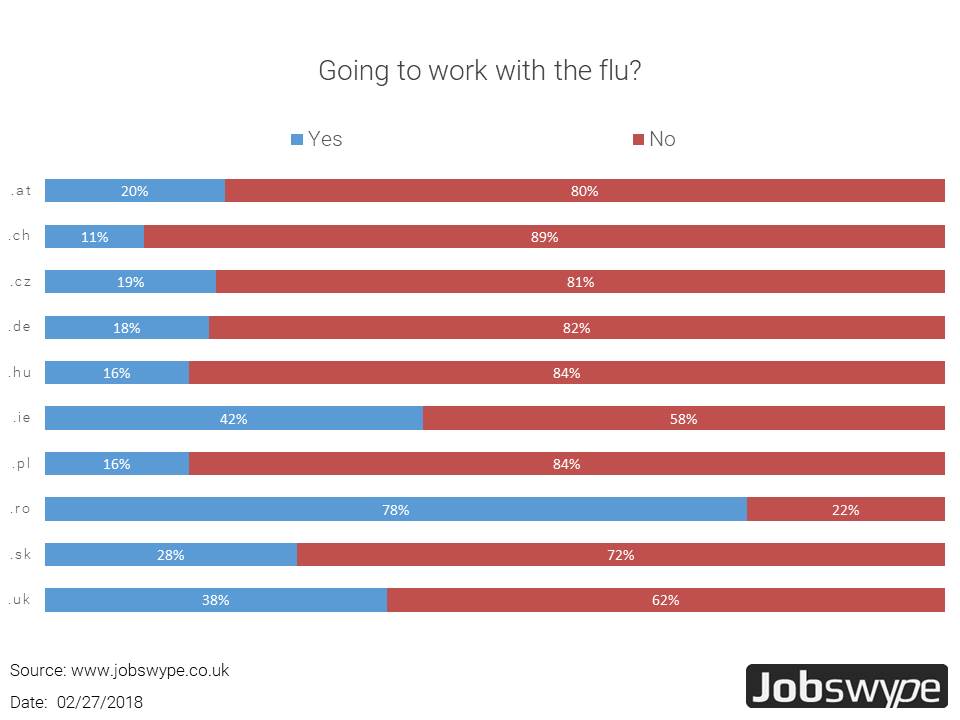 Majority of European employees stays home when having the flu