Majority of European employees not qualified for their job

How about your qualification at work? A poll of the monthly surveys of Jobswype investigated this question. Ireland and the United Kingdom are leading in the percentage of people who do not feel sufficiently qualified for their work.

Vienna, 06.03.2017 – Ireland and the United Kingdom are in line with the trend concerning the employee’s qualifications for their jobs. The most recent poll of Jobswype amongst its users showed that in most of the European countries (Austria, Czech Republic, Slovakia, Germany, Hungary, and Ireland) a converted third of the employees is underqualified, overqualified or just perfectly qualified for their jobs. Important discrepancies were to be seen in Switzerland and Rumania, where 55 per cent or rather 53 per cent of the users seem to be perfectly qualified for their work. In Poland it is at least 43 per cent.

„One of the most important factors which influence the well-being of the employees in their working lives is contentment. If the employee is too good for his position, first signs of dissatisfaction will show soon. The same applies to the case, where an employee is currently under the pressure not to make a mistake out of unknowingness. Neither over- nor underqualificatoin at work are a good harbinger of a productive employee”, says Jobswype director Christian Erhart.

These poll results prove the numbers cited by the Austrian channel ORF of the opinion research institute SORA, which was speaking about 15 per cent of overqualified Austrian employees. Reasons for that are to be found in the ever increasing number of university graduates who unfortunately don’t correspond to the demand on the labor market. Young academics therefore have to be prepared to compromise and take positions which are in fact below their level. Also women may be overqualified and willing to take compromises when reentering the labor market after pregnancy. Another group affected by overqualification may be immigrants, who’s qualifications might not be recognized. Existing professional abilities are not being made use of or further developed – in these cases you refer to “dequalification.”

„Employers should in any case pay attention to the fact that their employees are having the right qualifications for their work,” says Jobswype director Christian Erhart. Good managers ask specifically in performance reviews and take the training- and other suggestions and concerns or their employees very serious. “This is a great possibility for the company to on the one hand meet their employees with appreciation and on the other hand improving their loyalty concerning the company”, finds Christian Erhart.

This poll has been conducted by Jobswype in Apri l2017. 750 persons took part Europe-wide. 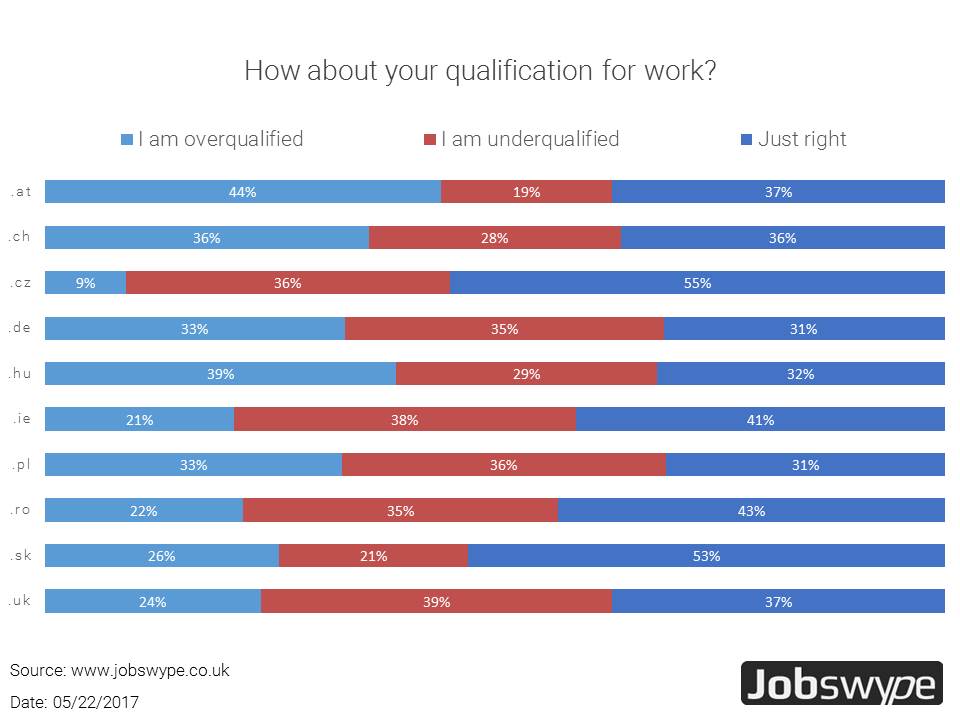 Majority of European employees not qualified for their job