Major reason for job change is still the salary

Why are so many people thinking about changing their job? After two years, Jobswype is asking its users this question again. The goal of this poll is to find out whether and how the criteria have changed. Criteria to choose upon are the following: salary, bad career opportunities, bad working climate, work life balance and underchallenge. Unsurprisingly, in ten of the polled countries the salary is the leading reason for people to change their jobs. 45 per cent of people in the United Kingdom would be willing to change their job for more money. This Jobswype poll shows as well: In the west of Europe the working climate is more important than the salary.

Vienna, 28.6.2017 - A difference that can be seen already at our poll in 2015 between the countries, stays the same – the salary is the number one criteria anywhere. Nevertheless the results also show that in the west of Europe a good working climate is almost equally important as the salary, whereas this doesn’t particularly play a rule in the former countries of the eastern bloc. 45 per cent of people in the UK could imagine changing their jobs for more money. The results vary upon country and are between 32 per cent in Switzerland and 62 per cent in Slovakia. This visibly big difference between west and east Europe is no coincidence as it is shown in the results of the poll. In the western countries, between 32 and 45 per cent chose the answer “salary” whereas in the eastern countries it has been 46 to 60 per cent.

The same mood shows the Jobswype poll of November 2015. Jobswype director Christian Erhart explains the results as follows: “In countries with a weaker economy, where the salary is in general lower, the salary is considered more important, whereas in countries with a higher average salary also other factors, such as the working atmosphere can be considered equally important.” The results agree with him, because while for 10 to 35 per cent of the users from western countries the working climate is considered important, this criterion is only relevant for 12 to 27 per cent of people coming from an eastern European country.

Viewed from this angle, the results – compared directly with the results from 2015 – also show that the conditions on the job market in the west might have tightened. All in all, the number of employees for whom the salary is an important factor in considering a job change has increased. “In 2015, the criteria salary has been an important factor to consider for 21 per cent of the people from Switzerland, compared to still 32 in 2017”, Christian Erhart considers. The same trend can also be seen in Austria, Germany, the UK and Ireland.

“A better salary for the same tasks continues to be tempting, while other factors also play a rule, as a fully satisfied employee is less tempted to compare and consider working for other employers,” concludes Christian Erhart the results of the most recent poll of Jobswype.

This poll has been conducted in May 2017. 2.094 users took part throughout Europe. 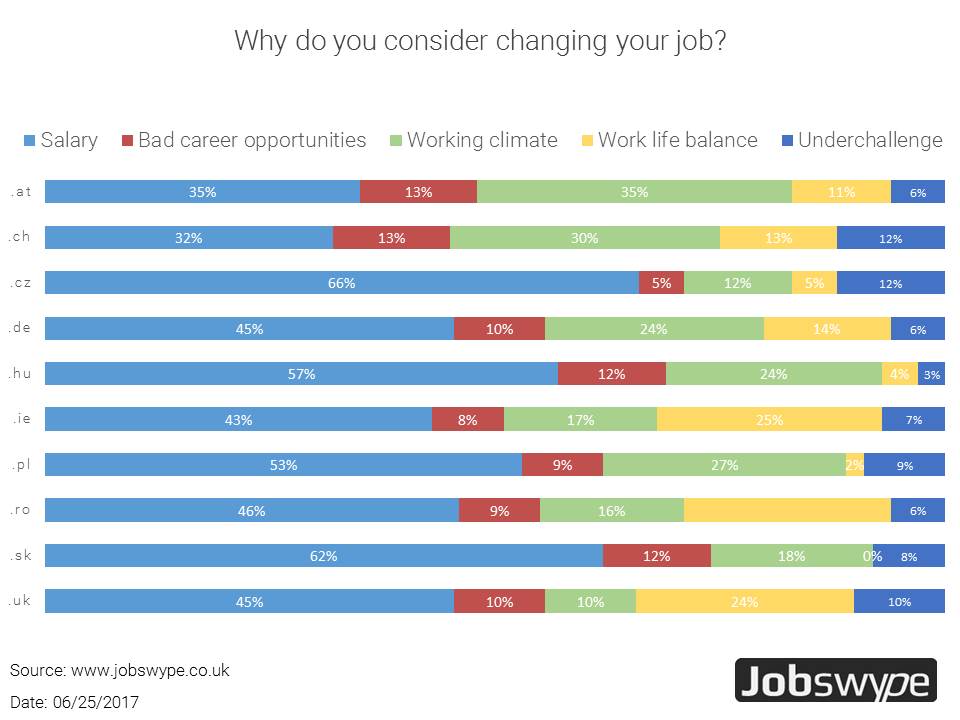 Major reason for job change is still the salary