English and Irish employees are willing to leave their country for a job. While employees of the DACH area and other parts of Europe are more willing to keep faith to their country when it comes to choosing a job. Hence the results of the recent Jobswype poll. This poll has had one of the greatest participations in Jobswype’s poll history with more than 3400 participators all around Europe

The results in Europe show that the current economical situation is  indeed moving employees towards thinking outside their box and considering taking a dream job abroad. Between 19% (Switzerland) and 37% (Ireland) of Jobswype users would consider moving to a different city within their country. Between 22 and 62% are in turn willing to move to another European country, whereby the 62% of the UNited Kingdom do clearly reflect the feeling of uncertainty after the Brexit.

“Unsurprisingly, within the German speaking countries with their low unemployment rates and best economic situation, the willingness to move abroad for a job is the lowest. This can be explained by the job searchers easily being able to find work within their own country,” explains Jobswype director Christian Erhart.

By contrast, employees of the Eastern Europe countries are completely willing to move to a Western European country in order to find a good job. But even there, an economic upturn can be observed.

“Compared to a Jobswype poll about mobility in the beginning of 2016, the number of people willing to emigrate has decreased importantly,” so Erhart. “The other great change compared to the previous year is the increased willingness of British people to go abroad for a job. Whole 62%, more than double the number from 2016, would be willing to leave their country for a job. Probably one of the consequences of the economical and social uncertainty resulting from the Brexit.”

Moving to another city would have been an option for between 18% (United Kingdom) and 36% (Switzerland) in the previous year.

For 26% of the people from Switzerland, 33% of Germans and 36% of Austrians a move for a job was out of question in 2016. The other countries being asked the same question achieved results varying from 12% (United Kingdom) and 29% (Czech Republic).

That the situation can also be a different one, was proved by the hungarian, rumanian and polish users, from whom only 13% respectively 19% would not at all be willing to change their domicile for a good or better job opportunity. Users of these countries consequently showed the highest willingness to move to another European country for better job opportunities (Hungary 39%, Poland 40%, Romania 45%).

These results have decreased importantly in the current poll from October 2017 (HUngary 36%, Poland 30%, Romania 26%).

This poll has been conducted by Jobswype in October 2017. 3424 users throughout Europe took part. 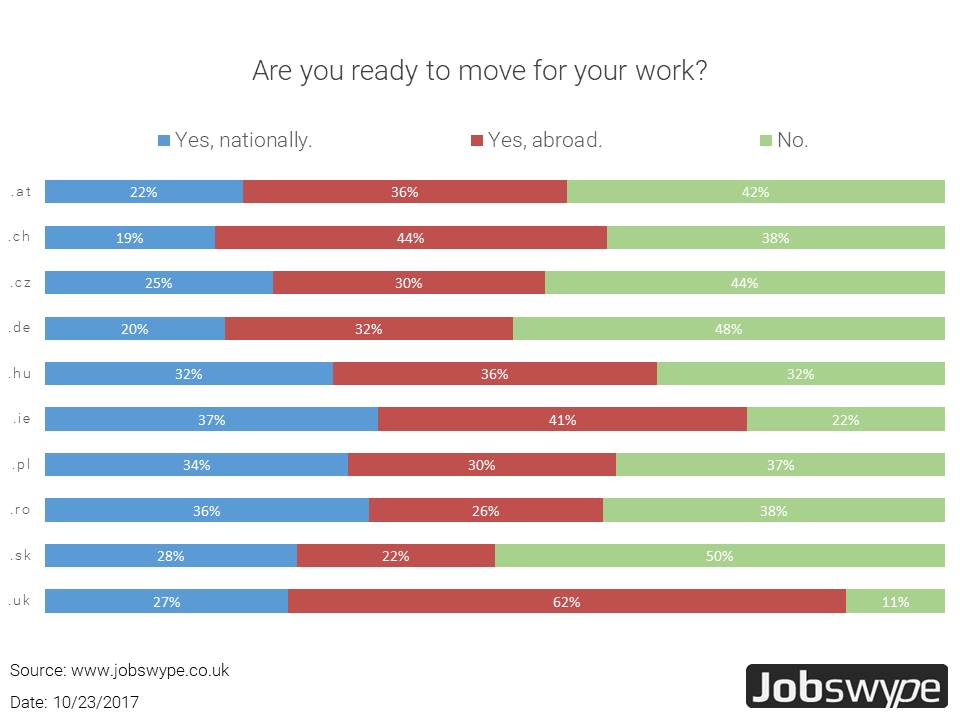