On the occasion of the international women's day, the job search engine Jobswype polled its users de novo. A disappointing result for all the people who thought that equality at work should be given in 2017. Almost two thirds of European female employees earn less money than their male colleagues, where qualifications are equivalent. These were the findings of the poll conducted in February by the job search engine Jobswype. Even though the United Kingdom is the country where with 55 % the highest percentage of people answered “yes” to the question if women and men are being paid equally but still there is enough place for improvement.

Vienna, 03/13/2017 - The international women's day on March 8th was taken as an occasion by Jobwype to ask its users for a second time to evaluate the situation of the Gender Pay Gap. As already said, the leaders in this poll concerning equal payment is the United Kingdom followed by Romania with 53 %. At the same time, Ireland (42%), Slovakia (41%), the Czech Republic (41%), Poland (40%) and Austria (40%) are in the midfield. The tail light is represented by Switzerland (35%), Germany (34%) and Hungary with only 27%.

“These results reflect almost identically the evaluation of the recent year. This shows that no improvement concerning equal payment between men and women can be seen,” says Jobswype manager Christian Erhart. The exception here is Rumani, where within the last 12 months a lot seems to have taken a turn for the better. While in 2016 only 27% of the polled people answered “yes” to the question “Are men and women getting paid equally where qualifications are equivalent?”, this year remarkable 53% answered “yes” to that same question.

An interaction of the trade union and politics is required

In such cases, the hands of employees are under no circumstances tied. On the websites of working right organisations for example, employees can inform themselves about the amount of the average monthly salary as well as the collective agreements of their respective professions. Consequently, they can demand an appropriate payment from their employers.

But also trade unions and politics are addressed here. While the salaries themselves are in most cases a result of personal negotiations with the boss, but trade unions can definitely help the situation by determining that the pay gap between men and women may not exceed a certain limit.

A task of politics would be, in turn, to put the gender pay gap on their agenda permanently to consequently eliminate this issue.

This poll has been conducted by Jobswype in Feruary 2017. 800 persons took part Europe-wide. 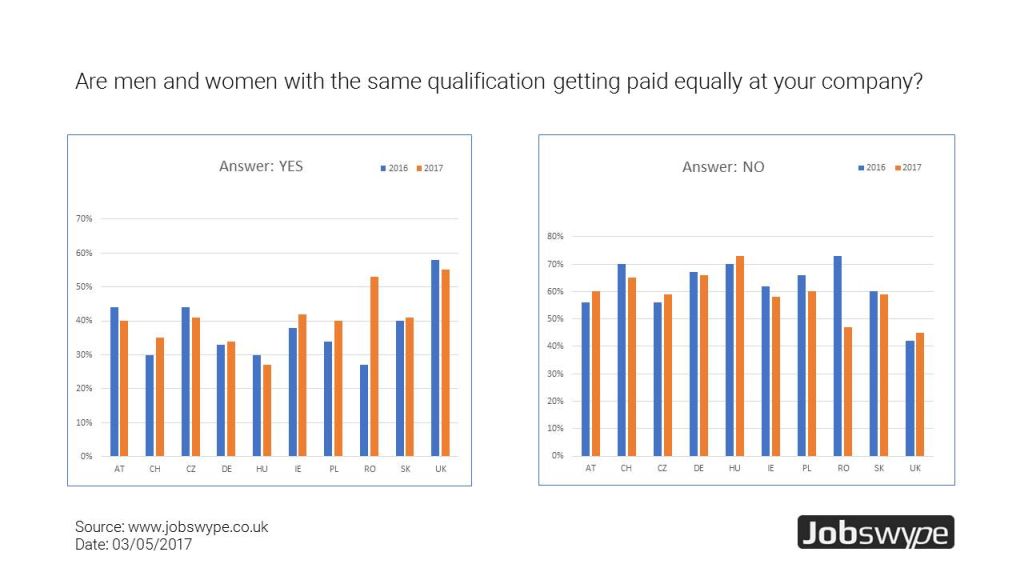